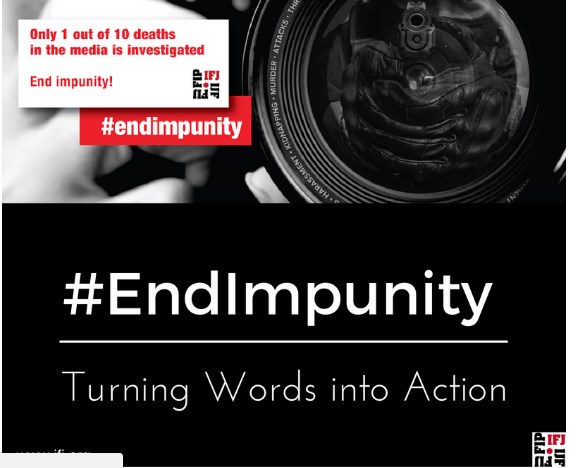 Brussels, 31 October 2016- On the third commemoration of the UN Day against impunity for crime targeting journalists, the International Federation of Journalists (IFJ), the world’s largest organisation of journalists with 600.000 members, today challenged governments to show political will in tackling the prevailing impunity for violence on media professionals in the world.

The IFJ, which has recorded 66 killings since the start of the year, blames the current media safety crisis on the governments’ failure to hold those who threat, attack journalist and kill media professionals to account for their actions.

The UN Day commemoration on 2 November marks the start of a campaign by the IFJ and its affiliates to end impunity, with a special focus on four countries: India, Mexico, Pakistan and Yemen.

“The abysmal rate of investigations and prosecutions of violence in journalism has entrenched impunity which fuels the current blood bath,” said IFJ President Philippe Leruth. “Until the clamour of governments’ representatives in the UN meeting halls during the adoption of resolutions by states to protect journalist finds echo through real action on the ground, the situation is unlikely to improve.”

The Federation, which has an associate status with UNESCO, the UN leading agency on the UN Action Plan for journalists’ safety and the issue of impunity; cites the latest figures from the Organisation on the matter which paint a gloomy picture.

According to UNESCO, less than 1 out of ten killings of journalists is prosecuted before national courts while 92% of incident in which violence was used to suppress free expression are not acted upon, giving criminals total immunity from justice.

As part of its global campaign over many years to end impunity, the IFJ is organising on 7 November a major conference in Brussels on the issue under the title: Turning Words into Action. The conference will bring together journalists, academics, representatives of international organisations as well as relatives of journalists who lost their lives to discuss strategies for the application of local, national and international law to secure justice for the victims.

“These levels of violence are unacceptable and governments have to face up to their responsibilities and take drastic action against those who attack journalists”, added Anthony Bellanger, IFJ General Secretary. “The IFJ remains committed to lifting the shadow of violence over journalism and this conference will work out the best ways to engage governments on enforcing the rule of law to provide greater media protection.” 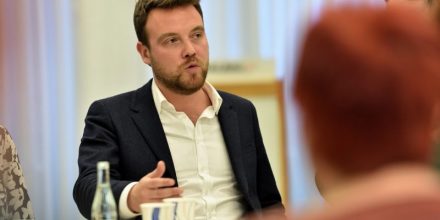