Why the Newsquest journalists are right to go on strike 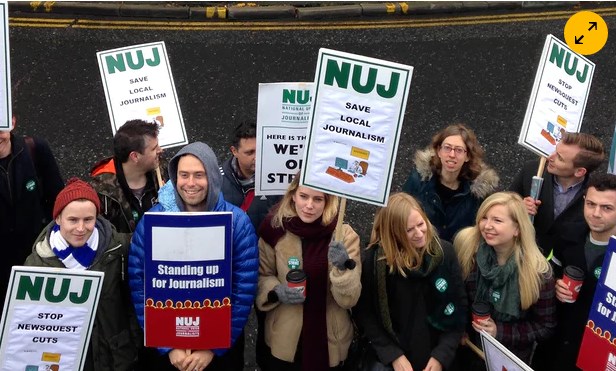 You might well reply that since Rafferty is the communications officer for the National Union of Journalists she would say that, wouldn’t she?

Sure, but that doesn’t mean her analysis, and her concern about journalism, is wrong. And the current situation at the south London division of Newsquest/Gannett, where a week-long NUJ strike is into its second day, illustrates her point.

But the point I have made time and again is that cutting too many people at the coal face, journalists, is counter-productive. I am not saying that there should be no loss of newsroom staff. My concern is about the increasing numbers being forced to leave.

Publishers are imposing redundancies that suit the bottom line, but without regard for the qualitative impact on their newspapers’ output.

Similarly, I am worried by the fact that the survivors of the regular culls are not being paid a reasonable wage and that their working conditions have deteriorated. This is making journalism a less attractive trade to enter, especially at local level.

The Newsquest situation is illustrative of journalism’s plight. Up to 11 jobs are set to go at its south London titles where 27 out of 29 staff have been put on notice of redundancy.

In such circumstances, this is surely a strike worth supporting. It’s not only about saving jobs, it’s also about saving journalism. About trying to preserve some semblance of an editorial service to the people who continue to read, whether in print or online, papers in Croydon, Richmond, Sutton, Wandsworth, Bromley, Dartford, Greenwich and places in between.

The NUJ has tabled a wage demand with Newsquest because most of its journalists have not had a pay rise since, would you believe it, 2008.

Consider those figures for a moment. They illustrate just how little Newsquest staff are currently receiving. It’s no wonder there is such support for the strikers, as reported by HoldTheFrontPage.

I note that a Newsquest spokesman defended its “need to revisit its cost base” and the “regrettable… restructuring [that] puts a number of roles at risk of redundancy” in order to ensure that business “has a credible future.”

I readily concede that both, historically, went hand in hand. What we need to explore is a future in which journalism, the original raison d’être for newspapers, can be preserved when an old-fashioned business enterprise is no more.