Turkey: Journalists in State of Emergency 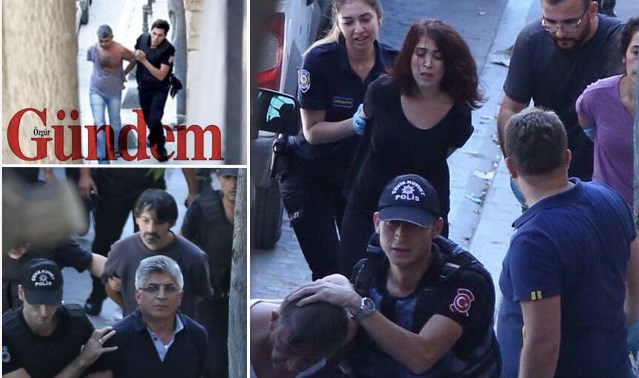 On Aug. 16, four individuals including former Zaman columnist Ali Ünal were arrested in the investigation into the July 15 coup attempt and at least 23 journalists were detained in operations outside the coup probe.

On the 27th day of Turkey’s of State of Emergency declaration, police operations mainly targeted the Kurdish press. The Özgür Gündem newspaper was shut down temporarily on the grounds that it spreads “propaganda on behalf of a terrorist organization.” Shortly after the announcement of the newspaper’s closure by authorities, police raided its office in İstanbul’s Beyoğlu district, sealing off the premises. During the police raid, the newspaper’s Editor-in-Chief Zana Kaya, journalists Zana Kaya, Günay Aksoy, Kemal Bozkurt, Reyhan Hacıoğlu, Önder Elaldı, Ender Önder, Sinan Balık, Fırat Yeşilçınar, İnan Kızılkaya, Özgür Paksoy (DİHA news agency) , Zeki Erden, Elif Aydoğmuş, Bilir Kaya, Ersin Çaksu, Mesut Kaynar (DİHA), Sevdiye Gürbüz, Amine Demirkıran, Baryram Balcı, Burcu Özkaya, Yılmaz Bozkurt (member of the press office of the Istanbu Medical Chamber), Gülfem Karataş (İMC), Gökhan Çetin (İMC) and Hüseyin Gündüz (Doğu Publishing House) were detained. According to a tweet by an account that belongs to Özgür Gündem, another person, whose name was not included in the list of those detained, was also taken into custody during the closure operation.

As part of the operations targeting Özgür Gündem, the homes of the newspaper’s former Editor-in-Chief Eren Keskin, columnist Filiz Koçali and the owner of the newspaper’s rights Kemal Sancılı were also raided. The three journalists couldn’t be found in the locations searched.

Distributors of Özgür Gündem were also targeted by the operations. On July 16, Hakan Ergün, an Adana based distributor for the newspaper was arrested and the home of the newspaper’s Van distributor Yılmaz Kumli was raided by police.

In a related development, a court rejected an objection filed against the July 31 arrest ruling for former Zaman columnists Şahin Alpay, Lale Kemal, Ali Bulaç and Nuriye Akman on the grounds that “no new evidence has emerged” in the investigation to secure their release.

On Aug. 15, Hürriyet reporter Arda Akın was arrested in the coup investigation.

According to a report by Hürriyet, its reporter Akın was detained while checking in with a police station under an earlier court ruling that had released him on probation. Akın, who was taken to testify to prosecutors, was asked questions about his Twitter messages and a message he had written to a police chief who conducted the investigation into match-rigging allegations in Turkish soccer in 2011. Akın, who was referred to a court by prosecutors, was arrested on charges of “knowingly aiding a criminal organization.”

Earlier, there had been reports of at least one arrest and one deportation involving foreign journalists. In the latest development regarding foreign journalists in State of Emergency, Spanish journalist and student Beatriz Yubero, deported from the country as part of the coup probe, announced that she would challenge a decision by Ankara University to terminate her enrollment in court.

On Aug. 14, a poet named Rıfat Sayar was detained over suspected links with Fethullah Gülen.

In late July, hundreds of newspapers, magazines, publishing houses and radio stations were shut down as per a decree having the force of law. As part of the decree, Ankara Gölbaşı Criminal Judicature of Peace had, on July 28, blocked access to 102 websites.

Further reports of censorship and gag orders have continued to emerge. On Aug. 14, the Izmir 7th Criminal Judicature of Peace issued a ban on publishing testimony from suspects or secret witnesses in the coup investigation. The ban on publishing information regarding suspect and witness testimony also applies to social media posts.

In another recent development, Özgür Gündem Newspaper’s official Twitter account, @ozgurgundemweb1 has been withheld in Turkey by Twitter. The micro-blogging website has failed to explain why it has chosen to yield to pressure from Turkish government in banning journalist and newspaper accounts.

State of Emergency rules seem to increasingly and extensively affect critical journalists unrelated to the coup investigation; particularly members of the Kurdish media. In addition to the 23 detentions during the police operation targeting Özgür Gündem’s staff on Aug. 16, several other Kurdish journalists were taken into custody in the past few days:

On Aug. 13, Dicle News Agency (DİHA) reporters Metin Bekiroğlu and Engin Eren were detained by police. On Aug. 14, Fatma Edemen, a reporter for the Kurdish news agency ETHA, was detained in the capital. Edemen, who has not been allowed to see her lawyer, has been on a hunger strike since Aug. 14. Another detainee, Hünkar Genç, a member of Turkey’s Federation of Socialist Youth Associations (SGDF) who was taken into custody on Aug. 14, has also been reported to be on a hunger strike.

Journalists detained under State of Emergency outside coup probe

List of media outlets shut down under State of Emergency decrees

Detain / Place in custody: To hold in police custody for police interrogation first, and later for testimony to a prosecutor. Might lead to a court appearance depending on the action taken by the prosecutor.
Arrest: To put into prison indefinitely – by court order – pending trial.
Released on probation: Released with an international flight ban issued. Usually entails checking in regularly with a designated police station.

These lists have been compiled by P24 editors from open news sources and will be updated regularly. Journalists who want to report developments about themselves or their colleagues can contact us at punto24info@gmail.com