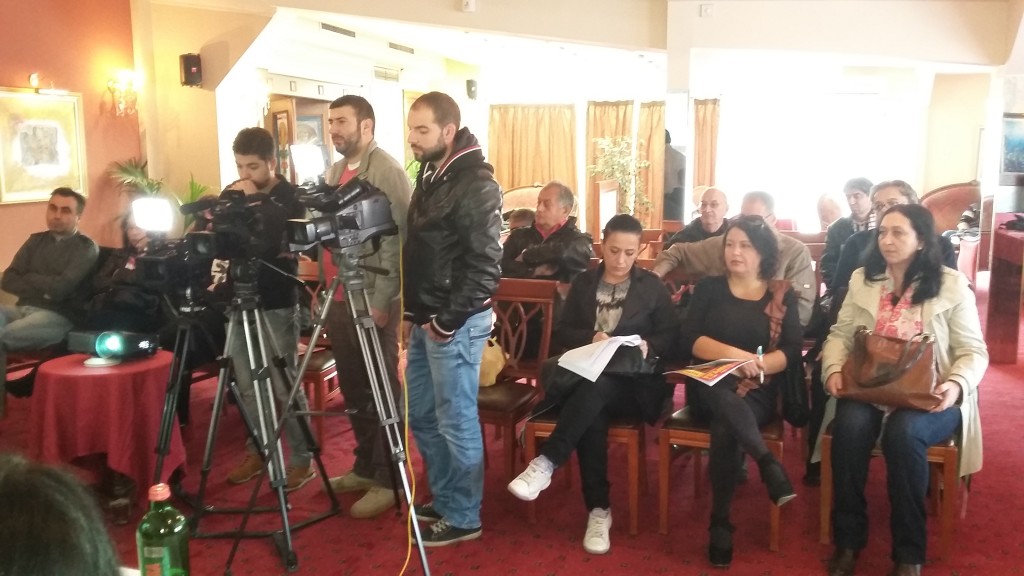 The survey “Mapping Unionism in Macedonian Media” is aimed at providing the initial indicator of the way in which journalists and media workers perceive union organizing and their working conditions. The collection of data was conducted through anonymous surveys in Stip, Veles, Bitola, Tetovo and Prilep over a representative sample of 150 respondents. The respondents were asked to give a general overview of the situation in the media market, including ownership, number of media, number of journalists and media workers. The survey covered the period March-May 2016.

The results analysis was done with the quantitative and qualitative discursive method tools in order to get a general picture of the media situation at local level. This venture was initiated by the global trends in union action faced with alienation of membership.

The results from the survey showed that, in terms of the economic stability, the media at local level are constantly struggling to survive in the market. This is especially true for printed and online media. The bad economic trends have a direct impact on the work status of journalists, with fixed-term agreements and precarious work, especially in online media, becoming a practice. Although the survey has identified journalist and media workers who work on fixed-term agreements, the fact that it is impossible to detect the number of workers in the online media, which are the most numerous in the market, only serves to prove the extent of precarious work.

Unionism at local level is exposed to strong pressures from employers and the political elites, in addition to the existing lack of faith in this type of organization.

1.1.Situation and structure of media in Tetovo

According to the survey results, 73 journalists and media workers are actively involved in the operation of the media, of which 57 permanently employed in the television and 10 in the radio sector. The survey could not define the number of workers on fixed-term contracts, but identified two journalists recruited as freelancers in the radio stations.

The ownership structure is transparent regarding ownership of multiple media by one employer. The monthly income in more than 80% of the respondents is below 300 euros.

The results from the survey show a certain level of interest on the part of journalists and media workers in union organization, but actual membership in a structural form is still lacking. Over 60% believe in unionism, but there is a noted lack of information about the benefits membership offers, while 40% believe that they can be protected in case of non-transparent dismissal.

Over 80% believe in solidarity among colleagues. Although some of them expressed the opinion that the situation in the media is subject to an immense political pressure, they believe that solidarity is a good foundation to fight it.

Over 60% have faith in their employers, and these are mostly people employed against permanent-employment contacts. Pressures at work and mobbing have been reported by 50% of the respondents. They are mostly exposed to unpaid overtime and coercion. 80% of the respondent reported a monthly income lower than 300 euros. Over 60% of journalists are female, while men comprise the majority of the technical staff (camera crew, photo reporters, sound editors, etc.)

2.1 Situation and structure of media in Prilep

Although it is difficult to establish with precision the number of journalists and media workers employed against long-term or fixed-term contracts, the survey shows that 45 are actively working in the media market.

Out of the total of 23 journalists with permanent employment, the majority come from the radio stations. Employments have also been noted in the online sector as well, although the number of such cases is minimal and reduced to 2 journalists. The survey shows no data on freelancers or fixed-term employments, and to the question why the employment status was so difficult to determine, the person who was conducting the survey in Prilep answered that precarious work was very much present and there were cases when one journalist worked as a freelancer for several media without having his/her employment status regulated.

Reporting is going downward and currently only around 10 journalists are permanently or temporarily employed with some of the national media or web-portals operating in Skopje.

Media ownership is mainly within the realm of the private sector. There are no instances of one person owning multiple media, but the regional TV Kanal Vizija has a dispersed structure in term of its financing, i.e. it is financed both by enterprises and the municipality budget.

Faith in union action in Prilep is almost non-existent. Only one journalist is a member of the union, despite the fact that 80% of the respondents are aware of the benefits membership offers. Over 95% of the respondents are informed about the work and activities of SSNM. A high percentage of the journalists and media workers believe that the union cannot protect them from non-transparent dismissal, while 60% believe in solidarity as a form of organizing. One of the respondents who has expressed doubts about the issue of solidarity stated that those are due to the lack of faith in the system and the current political situation in the country.

“The lack of faith in the system is the main reason for this answer. Considering the current situation in the country, I don`t believe that any time soon something will change, especially in the union sphere” is the explanation of the respondent with regard to his lack of trust in solidarity among colleagues.

Over 70% of the respondents who are unemployed or freelancers have stated that they believed in their employers, and that they worked in several media at the same time.

According to the survey, only 5% of the respondents have faced any form of pressure, while 95% believe that they have never been victims of mobbing.

The average salary of journalists and media workers is 250 euros and 30% of the respondents said that their monthly income is lower than 150 euros.

The survey shows that most of the journalists are women, while men work in other technical segments of the media.

3.1 Situation and structure of media in Bitola

The economic structure of the media in Bitola comprises 4 web portals, 4 radio stations, 3 TV stations and 5 printed editions. According to the data from the survey, there are over 65 journalists and media workers. For now, 23 journalists are permanently employed and 15 are freelancers. The ownership structure is transparent and is a part of the private sector. Although with a lower intensity and with poorer working standards, for now 14 journalists work as correspondents for some of the national media.

“If there was a good union, we would not be in this situation”, said one of the respondents.

Over 60 % of journalists and media workers who are freelancers have no faith in the employers, while those who are permanently employed stated the contrary.

Over 80 % of the respondents have suffered some form of pressure by an editor or an owner, in form of salary cuts. The reasons are mainly connected to reporting on certain politicians, who demand interventions in the stories.

The average monthly income of journalists and media workers is 300 euros. Women`s salaries are lower compared to those of the men.

4.1 Situation and structure of media in Shtip

The media market in Shtip comprises 8 media outlets and one non-profit student radio. The ownership structure is private and consists of 3 TV stations, 2 radio stations, 1 printed media and 2 online portals. According to the survey, the total number of journalists and media workers is 63, of whom 19 journalists are permanently employed, 10 are employed against fixed-term contracts and 7 are freelancers. 16 journalists work as correspondents.

As regards the level of information in union benefits and SSNM`s work, the journalist and media workers in Shtip have a high level of interest and knowledge of their working rights. As regards solidarity between colleagues, they believe that there is room for improvement of the conditions in the journalist profession in order to strengthen the self-confidence and integrity of the professionals.

The majority of the respondents believe that the union can protect them for non-transparent dismissal from work, with the exception of one of the respondents who stated that union organizations are passive and non-reactive when journalists face specific problems within the scope of union action.

“The union was not interested to help me when I was dismissed from work, nor even made an attempt. I would like to believe that this union will function differently” says one of the respondents.

The faith in employers is low and 70% of the respondents have reported mobbing.

“My salary was reduced without any notification or explanation. I heard from my colleagues how the director had complained that I was earning a lot of money from other media where I am engaged as a freelancer, while he had to raise a loan to buy wood as his 25.000 denars salary was not enough” is one of the answers to the question about the mobbing.

The average monthly income is between 250 to 350 euros. However, in most cases, journalists and media workers work for several different media at the same time.

5.1 Situation and structure of media in Veles

The media market in Veles comprises 3 web portals, 2 radio stations and 3 TV stations. According to the results from the survey, there are 38 journalists and media workers. For now, only 4 journalists are permanently employed, while 11 have fixed-term contracts and 5 are freelancers.

The survey could not be conducted in Veles due to the strong pressures and self-censure of the journalists and media workers who had expressed fear to answer the questions despite the anonymous nature of the survey.

SSNM does not have relevant data to be able to provide a general picture of the union organization in Veles.