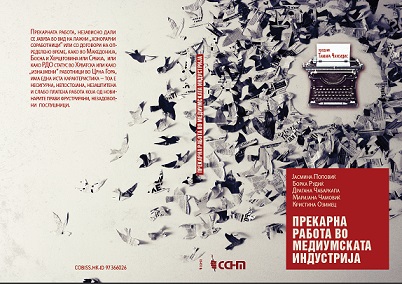 The term precarious work is relatively unknown to the Macedonian public. This was also confirmed by the survey conducted by SSNM among the journalists- two thirds of the respondents covered by this survey stated that they had never heard of this word. However, this is not so surprising considering how relatively new the term is. It appeared soon after World War II and became more frequently used during the 80s of the last century.

However, the essence of precarious work and the Precariat as a separate class of those doomed to lengthy, dependent, occasional or temporary work, in full existential and professional insecurity, employed under fixed-term contracts which guarantee no rights and protection and which can be terminated with no consequences for the employer is, unfortunately, very well known to journalists and, as the publication in front of you shows, workers from other sectors.

Precarious work, regardless whether it takes the form of fake “free lancers” or fixed-term contracts as in Macedonia, Bosnia and Herzegovina or Serbia, registered tax payers (RPO) as in Croatia or “hired” workers as in Montenegro, has one distinct feature- it is insecure, impermanent, unprotected and poorly paid and makes journalists frustrated, dissatisfied and subservient.

As one of our authors points out: “journalism is a profession with a pronounced need of professional self-reliance and financial independence”. By being employed on impermanent basis, unprotected and poorly paid, journalists stop safeguarding and fighting for democracy and start sacrificing their integrity for subsistence. Namely, the large insecurity present in the media outlets in Macedonia, Croatia, Bosnia and Herzegovina, Montenegro and Serbia has dramatic consequences on the professionalism, quality and, above all, freedom of journalism, which extends to the freedom of public speech, the quality of public debate, the right of the public to be informed and make decisions based on that information.

An overview of the situation in the region, in the context of precarious work, shows that this type of employment is on the rise, without any resistance from the media community. Precarious work is not talked about, it is taken for granted as inevitable faith, and the possibility for collective (trade union) organization is viewed as “something inconceivable”, as stated by one of our respondents.